Yes, DisplayLink and DisplayPort are two diferent types of display connections. DisplayLink basically allows users to connect several monitors passing information to them using two things: Drivers and USB bandwith. I have heard people saying that it replaces the need for a graphics card. Of course, this is kind of bogus information, sort of. The CPU would have to work harder to output graphics data to this "Virtual Display Adapter". During POST however, there are no Virtual Display Adapters ( as of yet ), so unless there is a proper identification at BIOS level in a near future for the displaylink ( similarly to those integrated video cards ), there will be no video output with this USB/Displaylink combination until drivers are loaded during OS. booting and the control is passed on to them.

Displayport on the other hand is integrated already on the graphics card so there's proper identification at VBIOS level and output data is sent to monitor during POST. Here's an example of a graphics card with displayport: 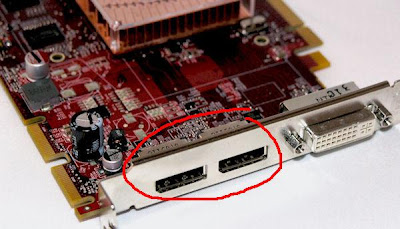 Im not saying one is better than the other, clearly both have their advantages but i personally don't have the need to connect six monitors ( not even 3 ) to my computer. If i were to buy a monitor, i would buy a monitor with DisplayPort or better yet, with both interfaces if available!


"DisplayPort is a digital display interface standard put forth by the Video Electronics Standards Association (VESA) since 2006. It defines a new royalty-free, digital audio/video interconnect, intended to be used primarily between a computer and its display monitor, or a computer and a home-theater system."

Email ThisBlogThis!Share to TwitterShare to FacebookShare to Pinterest
Labels: displayport vs displaylink