Ufff, i was installing a version of Windows Seven on my brother's computer, but Windows 7 did not detected /installed the proper drivers so i had to search for an alternative. The Standard VGA Graphics Adapter it gave me, could not go over 1024x1280 resolutions. I needed higher resolutions as i have a capable monitor of 1920x1200. Drivers were definitely not helping me.

After hours spent, i finally found this which almost did the trick (and you will see why it is almost). Don't know if it is true, but it seems the native graphics driver ( or Standard VGA Graphics Adapter ) from Windows is very close to
Intel(R) Graphics Controller 6.14.10.3722 . This is a driver for W2k but it works on Windows Seven. Going trough the setup.exe (double clicking the executable application) obviously is not the way to go. What you need to do is to go to Control Panel -> System -> Device Manager and Update drivers for your current listed Display Adapter selecting the .inf file.

2- Install from the ".inf", trough the device manager.

You may get errors (like i did) but simply restarting a trying again should do the trick. (It did for me anyway)

In the end you will be able to see at the device manager: 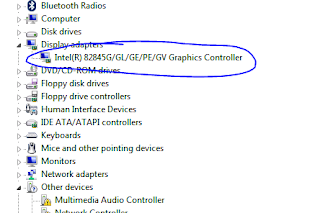 But as im not much of a player it's fine by him.